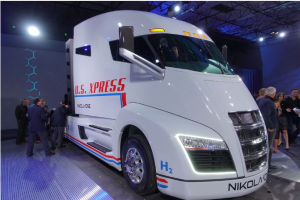 With manufacturers still trying to figure out how to give electric cars a range of more than 250 miles, Nikola Motor Company has just revealed its hydrogen-electric semi-truck here in Salt Lake City, and they’re claiming a total operating range of up to 1,200 miles.

Dubbed Nikola One, this Tron-like Class-8 rig has 1,000 horsepower and 2,000 pound-feet of torque. Just for comparison’s sake, note that the D13 diesel engine from Volvo Trucks is good for anywhere from 375 to 500 horsepower and 1,450 to 1,850 pound-feet of torque. The Nikola One gets the job done with zero emissions. In other words, this could well be a game changer.

The One’s hydrogen fuel cell feeds a set of h igh-density 320-kWh lithium batteries that power the fully electric drivetrain. This concept shown has six electric motors, one powering each axle. Because peak torque is reached the instant a foot touches the throttle, the Nikola One can shoot to 60 miles an hour in 30 seconds, compared to 60 seconds for a traditional diesel rig.

There’s more to the One than just the powerplant. Nikola claims the truck will come with your option of one or two full-sized beds, a 40-inch curved 4K TV with Apple TV, Wi-Fi and 4G LTE connectivity, as well as a full-size refrigerator, freezer and microwave. I’m not joking when I say the concept is nicer than my house.

An added benefit of getting rid of the diesel engine is better visibility. The driver sits farther forward and views the road through a panoramic glass windshield. An assortment of high-definition cameras, radar and sonar can produce a real-time aerial view of the truck and trailer, making blind spots a thing of the past.

Of course, as our very own Antuan Goodwin found out when he recently reviewed the hydrogen-powered Honda Clarity, fuel can be tough to come by. To counter that concern, Nikola is planning a string of hydrogen stations across the United States and Canada, with construction beginning in January, 2018. The 364 stations are slated to start coming online in late 2019. The One should take an estimated 15-20 minutes per fill-up, and yes, hydrogen-powered cars can use these stations as well.

There are still a lot of questions surrounding the Nikola One, including how solid the company’s financial backing and business plan is. And many questions remain about the level of engineering that’s gone into the One up to this point. After all, the Nikola One was said to be powered by turbines running natural gas just earlier this year, and now it’s a fuel-cell EV.

There’s also still no word yet on where the Nikola One will be manufactured, but the company hopes to have that sorted out by the middle of 2017. In the meantime, trucking giant Fitzgerald will produce the first 5,500 trucks, and the company aims to have trucks on interstates come 2020.

Despite being so far out, Nikola has already ballparked pricing, at least if you’re interested in a lease. You can reserve a truck for just $1,500, and the One will include unlimited hydrogen fuel, warranty and scheduled maintenance, the latter provided by well-known trucking company Ryder Systems, all for $5,000-$7,000 per month, depending on trim.

Whether or not Nikola’s massively ambitious plan can be carried out remains to be seen. It may take a decade or longer to roll out all 350-plus planned hydrogen stations, and building a factory that can handle the planned 50,000 units per year will require an investment that’s beyond the pale. Remember, Tesla has been working on its game-changing cars since 2003, and its electric vehicles remain unprofitable. Still, if the commercial-trucking startup manages to achieve even some of its goals, the Nikola One could very well revolutionize trucking.

Truck drivers can stay fit on the road?
Scroll to top